Despite Promised Crackdown, Citations for Inappropriate Drugging Remain Rare
Are States Ignoring The Impact On Vulnerable Residents? 98% of All Drugging Citations & 99.5% of Psychotropic Drugging Citations Fail to I.D. ANY Resident Harm.
New York, NY, November 8, 2018— The inappropriate antipsychotic drugging of nursing home residents, particularly those with dementia, is a widespread, national problem. These and other psychotropic drugs are too often used as a form of chemical restraint, sedating residents so that not only their behaviors but also the underlying causes for those behaviors do not have to be addressed by staff. In addition to destroying social and emotional well-being, these drugs greatly increase risks of stroke, heart attack, diabetes, Parkinsonism, and falls.
Last week, LTCCC published the Latest Drugging Rates For Every US Nursing Home. These data indicate that approximately 20% of residents - over 250,000 vulnerable individuals - are being administered powerful antipsychotic drugs in our nursing homes. Only 2% of the population will ever have a diagnosis for a condition which the government uses when it risk-adjusts for potentially appropriate use.
Today, we are announcing the release of the Latest National Data On Drugging Citations. States are required to issue a citation when a nursing home fails to meet minimum care standards. However, federal data for the last three years indicate that citation rates are very low, with significant antipsychotic drugging of residents who have dementia occurring with impunity in nursing homes across the country.
In November 2017, CMS introduced a separate citation category specifically focused on inappropriate psychotropic drugging. In addition, CMS issued new Guidance for surveyors and new survey protocols to better identify and address dangerous and inappropriate drugging. Unfortunately, continued under-enforcement means these changes have not resulted in more accountability. As the following figure shows, to date, 99.56% of all psychotropic drugging citations identify no resident harm whatsoever.

“It is very alarming that antipsychotic drugging is going up while, at the same time, states are retreating in their duty to protect both residents and taxpayer funds,” said Richard Mollot, LTCCC’s executive director. “Even in rare occasions when inappropriate drugging is identified by the state, the failure to recognize resident harm in over 98% of those cases sends a message to the nursing home industry that inappropriate drugging is okay.” Identification of harm is critical to nursing home quality assurance because, in the absence of a finding of harm or immediate jeopardy, facilities rarely face any penalty whatsoever.
In the United States, there were a total of 9,893 inappropriate drugging citations over the last three years. Only 165 of these citations identified resident harm. That is an abysmal rate of 1.56%. Meanwhile, 20% of residents receive antipsychotics, despite the nursing home industry’s six-year old campaign to improve dementia care and reduce antipsychotic drugging, and its claims that nursing homes “are getting dramatically better.” 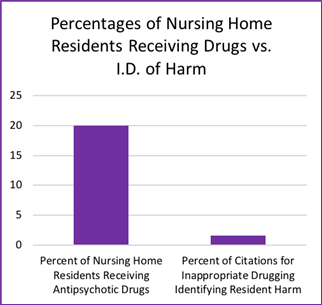 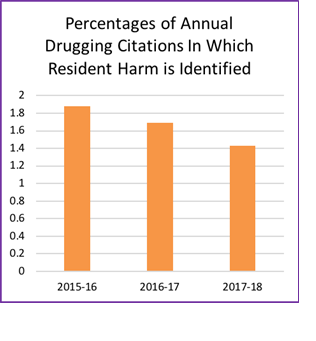